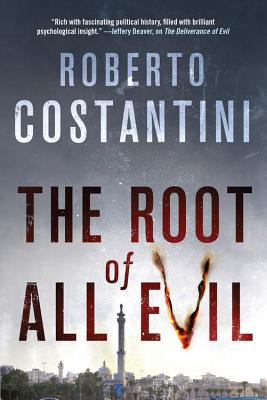 The Root of All Evil

By: Costantini, Roberto; translated from the Italian by N. S. Thompson

610pp. 8vo. Quarter bound cloth and paper over boards, stamped spine. Book is unread, has a complete number line starting with 1, is unmarked, unclipped ($26.99), tight, bright, and Brodart protected. Starts off in Libya in the 1960s, and ends foue decades later. Author's second novel after "The Deliverance of Evil."

In the 1960s, post-colonial Libya fell prey to the sprawling industrial greed of the West, driven by the discovery of oil. While the modern quarter of Tripoli, built by the Italians, was small and affluent, the rest of the city--like the rest of the nation--was left to fend for itself amid the arid, sandy stretches of North Africa. As tensions mounted between eastern and western ideals, terror began to supplant justice, and acts of religiously motivated violence began to fill some of Tripoli's darkest corners.

Against this backdrop, the teenaged Michele Balistreri--a smart young man plagued by thuggish tendencies and a youthful attraction to Fascism--suffered a succession of personal blows that would scar him for life: the death of his mother; a terrible tragedy that befell his best friend's family; and the consequences of his father's role in Gaddafi's rise to power. Worst of all, an innocent blood pact he made as a teenager would come to haunt him as an adult. Four decades later, journalist Linda Nardi is hard at work investigating the shadowy history of the Vatican Bank's involvement in Libya when she suddenly finds her attention diverted to an irresistible story assignment: covering the collapse of Colonel Gaddafi's forty-two year dictatorship. It is only a matter of time before Nardi's research and Balistreri's investigative work as a police commissario bring them into contact. Together they unearth a deadly conspiracy that goes to the top of Rome's power structure that neither of them will ever be able to forget.

Title: The Root of All Evil

The Root of All Evil