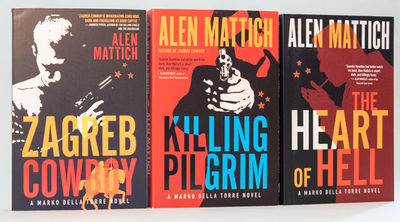 430pp. 5.25" x 8" x 1.25". In pictorial wraps, book is square, unmarked, bright, and clean. A first printing of this, the second in a trilogy that takes place in eastern Europe, mainly Yugoslavia, now Croatia and Slovenia. Marko della Torre is a secret policeman on the run. Very entertaining Euro noir.

The second novel in the Marko della Torre series, Killing Pilgrim is a propulsive political thriller following a complex plot hatched by members of the CIA and set against the backdrop of war-torn Yugoslavia. Early autumn, 1991. Croatia and Slovenia officially declared independence from Yugoslavia, and war is imminent between the Croats and the Serbs. Department VI of the UDBA has been dismantled, while the Yugoslav government scrambles to protect the State. In the midst of the political maelstrom, secret policeman Marko della Torre gets caught in an intricate web woven by the CIA and members of the Croat nationalist movement. They enlist della Torre to make contact with a man living in the shadows: the ex-UDBA agent who assassinated Olof Palme, the former prime minister of Sweden . . .