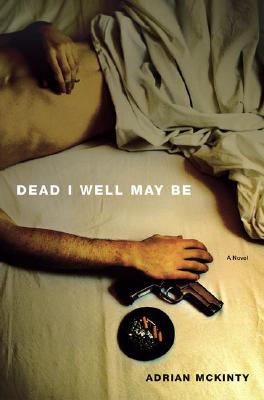 Dead I Well May Be A Novel

306pp. 8vo. Quarter bound with cloth and paper over boards, silver lettering on spine. Author has signed his name only on the title page. Book has a complete number line from 1-10, is unmarked, unclipped, unread, straight, clean, and jacket is Brodart protected. "Hard-boiled crime fiction" (Peter Blauner).

This Irish bad-boy thriller -- set in the hardest streets of New York City -- brims with violence, greed, and sexual betrayal.

So admits Michael Forsythe, an illegal immigrant escaping the Troubles in Belfast. But young Michael is strong and fearless and clever -- just the fellow to be tapped by Darkey, a crime boss, to join a gang of Irish thugs struggling against the rising Dominican powers in Harlem and the Bronx. The time is pre-Giuliani New York, when crack rules the city, squatters live furtively in ruined buildings, and hundreds are murdered each month. Michael and his lads tumble through the streets, shaking down victims, drinking hard, and fighting for turf, block by bloody block.

Dodgy and observant, not to mention handy with a pistol, Michael is soon anointed by Darkey as his rising star. Meanwhile Michael has very inadvisably seduced Darkey's girl, Bridget -- saucy, fickle, and irresistible. Michael worries that he's being followed, that his affair with Bridget will be revealed. He's right to be anxious; when Darkey discovers the affair, he plans a very hard fall for young Michael, a gambit devilish in its guile, murderous in its intent.

But Darkey fails to account for Michael's toughness and ingenuity or the possibility that he might wreak terrible vengeance upon those who would betray him.

A natural storyteller with a gift for dialogue, McKinty introduces to readers a stunning new noir voice, dark and stylish, mythic and violent -- complete with an Irish lilt.

Title: Dead I Well May Be A Novel

Dead I Well May Be A Novel