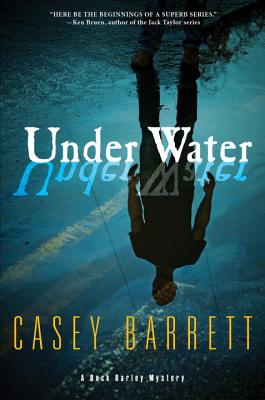 Under Water A Duck Darley Mystery

309pp. 8vo. Paper over boards, gilt on spine, signed by the author on the title page. Book is unread, unmarked, unclipped, tight, bright, and Brodart protected. Author's debut fiction. Has a complete number line from 1-10 and is gift quality. Duck Darley will be back.

"Here be the beginnings of a superb series."
--Ken Bruen, author of the Jack Taylor series

Duck Darley should have been a winner. Once a competitive swimmer destined for Olympic gold, he drank away his gilded youth and followed his fraudster father's footsteps into prison. Barely scraping by as an unlicensed private investigator, Duck now chases down cheating spouses for the same Manhattan elite who once viewed him as equal, and drowns bitter memories with whatever fills his glass. Duck's lost glory days resurface when he's tasked with finding the teenaged sister of a former teammate turned Olympic champion. Privileged Madeline McKay vanished over Labor Day weekend, leaving behind a too-perfect West Village apartment and a promising athletic career of her own. Duck thinks he's hunting for a self-destructive runaway--until Madeline's film student ex is savagely murdered, and the media spins her as the psycho who killed him. As Duck searches for Madeline, he's plunged back into the dark underbelly of Olympic swimming--a world rife with wild lies and terrible violence. And he soon learns that no matter how hard he tries to escape his past, demons still lurk beneath every surface . . .

Under Water A Duck Darley Mystery