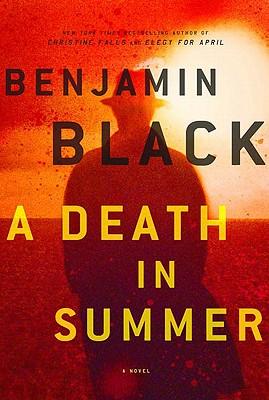 A Death in Summer A Novel

308pp. 8vo. Red paper over boards, stamped spine. Signed by the author on the title page. Book has a complete number line from 1-10, is unread, unmarked, unclipped, tight, straight, and Brodart protected. A Quirke novel.

On a sweltering summer afternoon, newspaper tycoon Richard Jewell--known to his many enemies as Diamond Dick--is discovered with his head blown off by a shotgun blast. But is it suicide or murder? For help with the investigation, Detective Inspector Hackett calls in his old friend Quirke, who has unusual access to Dublin's elite.

Jewell's coolly elegant French wife, Francoise, seems less than shocked by her husband's death. But Dannie, Jewell's high-strung sister, is devastated, and Quirke is surprised to learn that in her grief she has turned to an unexpected friend: David Sinclair, Quirke's ambitious assistant in the pathology lab at the Hospital of the Holy Family. Further, Sinclair has been seeing Quirke's fractious daughter Phoebe, and an unlikely romance is blossoming between the two. As a record heat wave envelops the city and the secret deals underpinning Diamond Dick's empire begin to be revealed, Quirke and Hackett find themselves caught up in a dark web of intrigue and violence that threatens to end in disaster.

Tightly plotted and gorgeously written, "A Death in Summer "proves to the brilliant but sometimes reckless Quirke that in a city where old money and the right bloodlines rule, he is by no means safe from mortal danger.

Title: A Death in Summer A Novel

A Death in Summer A Novel