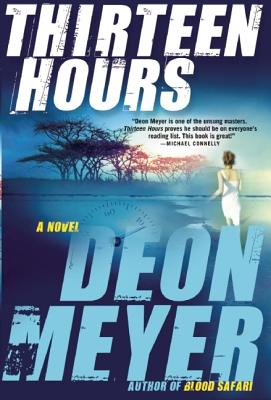 By: Meyer, Deon; translated from the Afrikaans by K. L. Seegers

412pp. 8vo. Paper and cloth over boards, stamped spine. Signed by the author on title page. Book has a complete number line from 1-10,is unrea, unmarked, unclaipped, tigh, bright, and has a Gaylord jacket protector. Homicide detective Benny Griessel is at work in this novel in Cape Town, South Africa.

It's early morning in Cape Town and Bennie Griessel, homicide detective with the South African Police Service, has a bad feeling. He's been sober for nearly six months--156 days. But day 157 is going to be tough. A teenage girl's body has been found on the street, her throat cut. The girl was an American--a P.R. nightmare in the #1 tourist destination in South African. And she wasn't alone. Somewhere in Cape town her friend, Rachel Anderson, an innocent American girl, is hopefully still alive.

In Thirteen Hours, the latest from the man hailed as the "King of South African Crime," Detective Griessel races against the clock to unravel two murders and track down Rachel Anderson in a single day. The book opens with Rachel on the run, terrified and unsure of where to turn. She manages to hide, but overhears one of the men say something about calling "their police." Can she even turn to the cops? Then the men spot her, and she takes off again. The chase is unrelenting. Meyer is an expert at grabbing the reader and refusing to let go. The pages fly by with a sense of desperation for Rachel's safety and a burning curiosity for why the men are after her--a secret Meyer keeps until the final pages. There is a second murder investigation in Thirteen Hours, and it's fascinating. An alcoholic singer wakes up next to a gun and her husband's dead body. A famous lothario music producer, Adam had a few people who might have wanted him dead, including the husband of a gospel singer who committed "the Big Sin" with Adam on his desk the day before. Bennie Griessel dives into the case. He has real sympathy for Alexa, the suffering alcoholic. Temptation is never far away for Bennie, and seeing how her first drink eases her pains is dangerous. He also has some well-founded doubts about the crime scene. Adam was shot late at night, when Alexa would have been drunk and incapacitated. What's more, there are no shell casings from the spent rounds; Adam was killed elsewhere. Meanwhile a telephone rings in a suburban home in Indiana. Rachel has managed to reach a pay phone in a deli and call her parents. They are distraught, desperate to help and start making their own calls. Phones start ringing around the country, up the political ladder, reaching across to the U.S. Ambassador in Pretoria, the South African police, and finally Bennie Griessel. He vows to Rachel's father that he won't rest until he finds her, and he doesn't rest, racing to track her down and bring her home safe. Thirteen Hours was a #1 bestseller in South Africa, and received excellent reviews. "So engaging you can get paper cuts from turning pages too fast," the Mail & Guardian said. Another paper raved "the message is simple: Thirteen Hours is available, it does not matter how much it costs, just go buy it." (Beeld) It is that good. It's atmospheric--you get a sense of Cape Town as an outsider and an insider--and gripping from page one. You simply can't put it down.