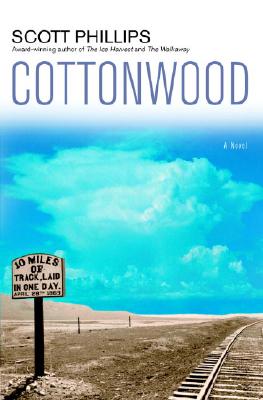 292pp. 8vo. Paper over boards, gilt on spine. Signed by the author on half-title page. Book has a complete number line from 1-10 and is a stated First Edition: February 2004. Book is straight, bright, unmarked, unclipped, unread, and has a Brodart jacket protector. Author also wrote "The Ice Harvest" and "The Walkaway."

In his "New York Times" notable debut, "The Ice Harvest," Scott Phillips gave readers an instant noir classic that spanned twenty-four eventful hours in the life of a mob lawyer hoping to skip town (namely Wichita) with a small fortune. Phillips followed with the acclaimed sequel, "The Walkaway," showing how a seeming windfall can wreak wicked havoc on the lives of its recipients. Now this award-winning author broadens his canvas, writing his most accomplished novel yet--one that is rich in suspense, drama, historical sweep, and Phillips's unique blend of unforgettable characters.
In 1872, Cottonwood, Kansas, is a one-horse speck on the map; a community of run-down farms, dusty roads, and two-bit crooks. Self-educated saloon owner and photographer Bill Ogden looks on his adopted town with an eye to making a profit or getting out. His brains and ambition bring him to the attention of one Marc Leval, a wealthy Chicago developer with big plans for the small town. The advent of the railroad and rumors of a cattle trail turn Cottonwood into a wild and wooly boomtown--and with Leval as a partner, Ogden dreams of bringing civilization to the prairie.
But civilizing the Great Plains was never that simple. While many in Cottonwood distrust Leval's motives, and mob violence threatens to derail the town's dreams of greatness, Ogden finds himself dangerously obsessed with Leval's stunningly beautiful wife. Meanwhile, plying its sinister trade unnoticed, an apparently ordinary local farm family quietly butchers traveling salesmen, weary travelers, and other unsuspecting wanderers.
In his own inimitable brand of narrative wizardry, Scott Phillips traces the metamorphosis of a frontier town that becomes a lightning rod for sin, corruption, and murder. He also brings to life actual crimes that befell Kansas in the 1870s and 1880s, carried out by a strange clan who popularly became known as The Bloody Benders. Brilliantly written, maliciously fun, and full of many surprises, "Cottonwood" is historical fiction at its finest.