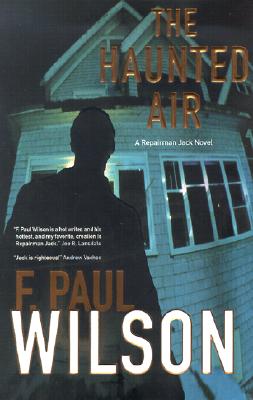 415pp. 8vo. Cloth over boards, signed by the author on the title page along with the word "Boo" and a small ghost image. Book has slight wear to extremities, with spine ends bumped. Dust jacket, in a Gaylord Mylar protector, has some shelf wear to edges and corners, but book is straight, unclipped, clean and unmarked. Complete number line starting with 1; stated First Edition: October 2002.

Jack is back, for 2002. F. Paul Wilson's engaging, self-employed, off-the-books fixer, Repairman Jack, returns for another intense, action-packed adventure just a little over the border into the weird, in "The Haunted Air." First introduced years ago in the bestseller "The Tomb," Jack has been the hero of a series of exciting novels set in and around New York City including Legacies, Conspiracies, All the Rage, and Hosts. "Repairman Jack is a wonderful character, ultracompetent but still vulnerable. Wilson strolls into X-Files territory and makes it his own, keeping the action brisk and the level of suspense steadily rising," said the San Francisco Examiner & Chronicle.
In Astoria, Queens, the lively ethnic neighborhood just across the river from Manhattan, a house is being haunted by the ghost of a nine-year-old girl in riding clothes. More than two decades before, she'd been abducted from stables in Brooklyn. Now it's up to Jack to uncover the truth of her story and liberate the pretty, blond spirit. Perhaps the answer is in the odd little store called the Shurio Coppe? Ah, but that would be telling.
Jack does things no human being should be able to do, but we watch, in horrified fascination, as the forces of evil seem about to triumph and fill the world with eternal darkness. And then-- but you must read the book.