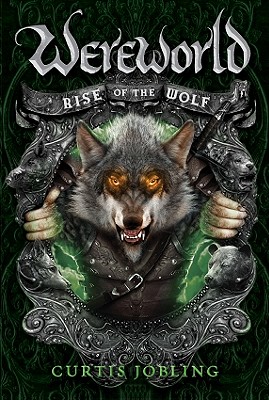 Wereworld: Rise of the Wolf

412pp. Contents, Acknowledgments, map, plus seven page excerpt from "Wereworld: Rage of Lions." Book is signed, dated (28th Nov 2011), numbered (5/5), and doodled on the title page with a quote from the book: "His fingertips played over the decorative pommel, a steel Wolfshead glaring up at him in an emotionless stare." Book is unread, tight, bright, unclipped, unmarked (except on the title page), and jacket has a protector. Anumber line from 1-10 is on the copyright page.

A swashbuckling new series for Ranger's Apprentice fans
Imagine a world ruled by Werelords - men and women who can shift at will into bears, lions, and serpents. When Drew suddenly discovers he's not only a werewolf but the long-lost heir to the murdered Wolf King's throne, he must use his wits and newfound powers to survive in a land suddenly full of enemies. Drew's the only one who can unite the kingdom in a massive uprising against its tyrant ruler, Leopold the Lion. But the king is hot on Drew's tail and won't rest until he's got the rebel Wolf's head.

Title: Wereworld: Rise of the Wolf

Wereworld: Rise of the Wolf