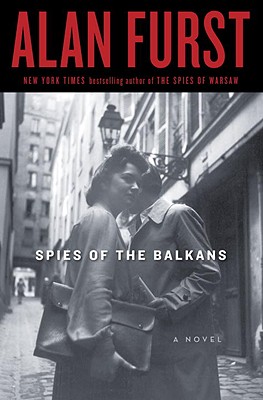 Spies of the Balkans

Greece, 1940. Not sunny vacation Greece: northern Greece, Macedonian Greece, Balkan Greece--the city of Salonika. In that ancient port, with its wharves and warehouses, dark lanes and Turkish mansions, brothels and tavernas, a tense political drama is being played out. On the northern border, the Greek army has blocked Mussolini's invasion, pushing his divisions back to Albania--the first defeat suffered by the Nazis, who have conquered most of Europe. But Adolf Hitler cannot tolerate such freedom; the invasion is coming, it's only a matter of time, and the people of Salonika can only watch and wait.

At the center of this drama is Costa Zannis, a senior police official, head of an office that handles special "political" cases. As war approaches, the spies begin to circle, from the Turkish legation to the German secret service. There's a British travel writer, a Bulgarian undertaker, and more. Costa Zannis must deal with them all. And he is soon in the game, securing an escape route--from Berlin to Salonika, and then to a tenuous safety in Turkey, a route protected by German lawyers, Balkan detectives, and Hungarian gangsters. And hunted by the Gestapo. Meanwhile, as war threatens, the erotic life of the city grows passionate. For Zannis, that means a British expatriate who owns the local ballet academy, a woman from the dark side of Salonika society, and the wife of a local shipping magnate. Declared "an incomparable expert at his game" by The New York Times, Alan Furst outdoes even his own finest novels in this thrilling new book. With extraordinary authenticity, a superb cast of characters, and heart-stopping tension as it moves from Salonika to Paris to Berlin and back, Spies of the Balkans is a stunning novel about a man who risks everything to right--in many small ways--the world's evil.

Title: Spies of the Balkans

Spies of the Balkans